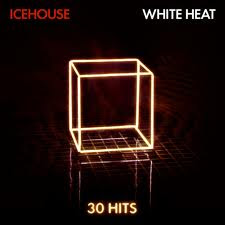 I must qualify this review by stating that whilst I have many favourite classic rock Aussie bands, from Chisel to Midnight Oil to Oz Crawl, Iva Davies & Icehouse have always been my most favourite Aussie band of all time, and in my view "Great Southern Land" tops the many fantastic songs written about Australia, its landscape & its native aborigines, by many fine acts.
It was therefore unbelievably exciting when I found out Iva Davies had put a band together & was touring Australia as Icehouse again (I had seen them live 3 times in the 80s). The fact that they were going to tour with their great mates Darryl Hall & John Oates (the most successful pop duo of all time) made the occasion even more special.
And Iva & his band did not disappoint! Iva, who's always been known for his mastery of digital & computerised technology from his early 80s days, has used his time away to produce a much sharper & crisper sound for the band, has fine tuned the fans' favourite live songs, and most importantly has preserved his divine voice over the years.
The fans were overjoyed by the end of the set & if anything, the band could have stayed on stage & continued with their other big hits such as 1) no promises 2) paradise 3) Street Cafe 4) Baby you're so strange 5) Mr Big 6) Touch the fire etc etc....except that they had to make way for Hall & Oates instead
The ultimate compliment to the band came in scores of fans who simply left after the Icehouse set & did not bother to stay to see the great Hall & Oates! A young couple next to me asked me who the band after Icehouse was!!! & left satisfied. 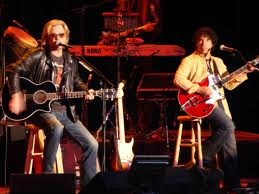 The icing on the cake for a great night of entertainment could only be a legendary pop act such as Hall & Oates, the most successful pop duo of all time! And they did not disappoint either. Their band was great & their songs so familiar to the crowd.
They showed their confidence by starting their set with their most successful chart topping song of their unbelievable careers, "Maneater". Not many acts would start their set with one of their all time greatest hits, But Hall & Oates did, and afterwards did not disappoint with the
rest of their set either!
All in all most fans left the night fully entertained & feeling they had got full value for their money.
Posted by Unknown at 9:12 PM 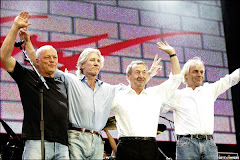 The last time the magnificant four were ever on stage together